A “Not So Surprise” Proposal

Wow, it must be random! One moment I am blogging about my current journey with Big A and Small A and next moment, I am sharing about “proposal” of Papa Yang???

This post is actually a part of the “Proposal Blog Train” where 15 mummies will take turn sharing about their proposal every day for 15 days straight.

And today is my turn!

With my husband’s permission, I can be open to blog down all the tiny details including the not so surprised proposal that was behind the scene and unknown to many.

This took place some years back. How long is it? 4-5 years? I wish I remembered everything if not Papa Yang will definitely correct me when he read this. =P I hope he won’t complain after this post is up because… it will be too late.

For those that followed us through this journey would know, we met in 2009 through mutual friends and with attempts of matchmaking, finally we got together in 2010. It wasn’t like fairy tale with a happily ever after. Well, my boyfriend (now husband) tried to make our get-together as big as the proposal which afterward became a headache for him when he wanted to plan the proposal. We went through many struggles and hardships. Transition after transition. Arguments and disagreements and learning about accepting each other’s strengths and weaknesses. Being open to talk about our emotions (my boyfriend back then was good with it. He loved to talk about how he feel while I loved to bottle-up my thoughts). With these, we stick through what we called a testing period to know that we just meant for one another. =P

Thus after 1 year of courtship (we got together on my 22nd birthday), for my 23rd birthday, he planned a “secret” place for us to have our dinner.

I captured this photo of him while he was busy typing away. Who he was communicating with? Well, I only found out after the day ended…

Tada! The place that he bought me for my birthday! The Cliff at Sentosa. A very beautiful place.

He bought me for fine dining! Well, considered my first fine dining experience. I was trying very hard to be as graceful as possible. I was pretty dress down at that moment too!

And so, we spent the next 1-2 hours, fine dining together and snapping photos… With my old boyfriend trying very hard to finish his not so nice fish (he was pretty sad that the fish turned out to be… so so… while my lamb chop which was their signature dish was super good as claimed). After he finished his fish, he asked me to wait for him and off he went to the washroom.

While waiting for him, that when the surprises slowly unfolded. My bestie suddenly appeared…

Ok, I hope my bestie don’t kill me over this photo! We all looked so different back then! My bestie was sent to kidnap me and blind-folded me while guiding me into the car of my husband’s bestie! For a moment, I was like what!!! 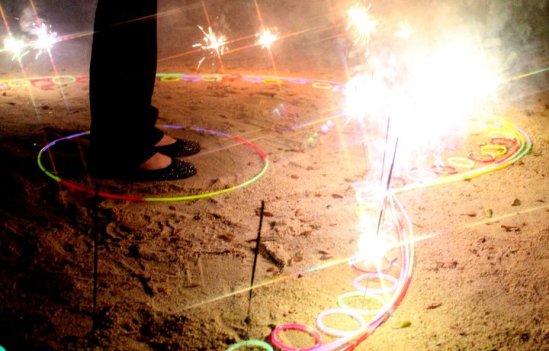 And this was where I ended up! The smoke was making me jumpy! LOL

Those photos that was taken in-between the surprises and proposal was rather… not so nice. At least seeing my own face at that times made me wanna find a hole and hid myself. =X

To cut the long story short, my husband invited all my Poly and his Uni besties to celebrate my birthday and when they unfolded the blindfold, I was surprised! They bought out a cake and after singing birthday song, blow the candles and gave my “thank you” speech, I was all ready to get out of the circle that when they said no no… and they passed me a phone with my boyfriend on the other line. My boyfriend was asking me some questions that I couldn’t remember and he started to sing 童话! Before I knew it, he was walking toward me from my back. That when he got on his knee to present his 99 roses and a ring! I was tearing and hiding myself in his jacket… It was hard to make me cry. My husband kept saying I must be the only bride in the world who never cry when giving thank you speech to my parents during our wedding. 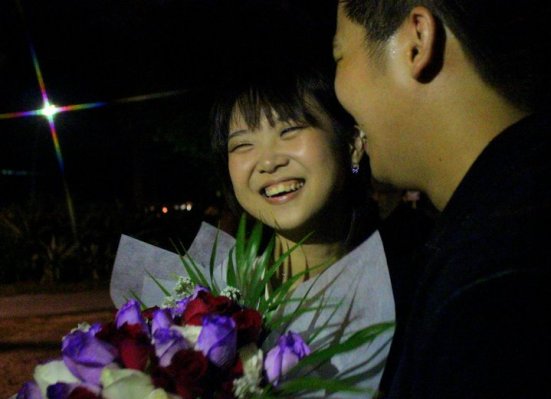 You all should know my answer. How can I said NO?

A customized ring! One of it kind…

Until today, I really thank all the friends who were there to witness our special moment. It was once in a lifetime. Many came down despite that it was at Palawan Beach. You guys really made us happy. You know who you are. =P

And as I said, I am going to share all the behind the scene details. Let just said… I already suspected my boyfriend already going to propose. Oop… And it wasn’t a full surprise for me… Another OOP! How did this happened? How come I know?

Well, I didn’t know what was going to happen. What I knew was… one fine day, weeks before the proposal, I was using laptop… was it mine or his? And I wanted to check my email… And his mail box popped up! Then I saw florist shop sending him emails and out of curiosity… another big OOP… don’t scold me please for invading my boyfriend’s privacy. We shared all our passwords for everything (bank accounts etc) and at times he asked me to help check his emails for him. And then… that when I found out he was ordering flowers… And oop, did I saw another email from the ring shop? Pretending I see no evil… I told myself maybe it was for V-Day and off we went to Vietnam for a 1 week holiday.

, he nearly fainted!!! He wanted to find a wall and banged his head (some anime actions here). With some declarations that he would never let things like that happened again… Off we went to plan our wedding. But not before he shared he planned attempt to proposal in Vietnam using sky diving!!!

Thank to The Chill Mom for hosting this blog train. It really give me goosebumps trying to write up the proposal story. And next up, we have Shub from RainbowDiaries. Shub is a mom to 2 wonderful kids, wife to a very supportive hubby, an IT professional and a multitasker. This multi-tasking ability makes her to write RainbowDiaries – Parenting, Lifestyle and Food blog site. 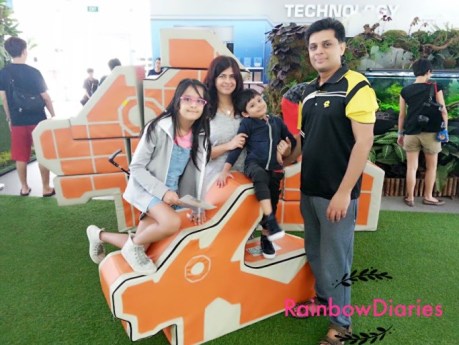