11/11/15 is the beginning of another stage of our lives for the Yang family.

We chose this date for the birth of Baby Art not because it sounds nice but rather due to the fact that I happened to hit the first day of week 37 (based on ultrasound scan) and also Arthur decided to kick a hole in my water bag at the end of week 36.

So to prevent unforeseen circumstance that might lead to emergency c-section, I managed to convince my Gynae to allow me to give birth at week 37 instead of the advised week 38 or 39.

The experience was totally different from Arthur’s time. During Arthur’s time, I was unprepared, I thought I was well-prepared but I would never be expected my water bag to leak before the due date and neither was I prepared for an emergency c-section that led to after pregnancy complication which was rare yet did happen to certain women.

Thus for this pregnancy, I decided to go for elective c-section. Which many people asked me why I don’t want to try for VBAC, a well-known procedure for those ladies with c-section and wanted to have a chance to try for the natural birth. Yet for the safety of my baby and also based on my first delivery, I was having issues with dilation, I managed to convince my current Gynae who is a pro-natural Gynae to allow me to have c-section.

For those who visited me would know, for my first delivery, I chose Thomson Medical Center (TMC) but this time around I went for Mt Alvernia (MAH). This was due to the change in my choice of Gynae and this time around was a totally different experience. MAH has always been known for being one of the best maternity hospitals with nurses that are very nice and caring toward patients and babies. This doesn’t mean the other hospitals are not good but among the mummies, MAH is one of the first to be considered beside TMC. The only difference was, during my TMC’s stay as my previous Ggynae provided free ward upgrade from 4 bedded to 2 bedded thus I selected 4 bedded yet enjoyed the amenities of 2 bedded but for MAH, there isn’t any free upgrade and as I don’t like to stay alone, I chose 2 bedded.

Thus my husband and I decided to check in at midnight under the advice of my gynae’s clinic assistant which arranged my operation to be in the early morning around 8 plus and if we chose to admit just before the operation, we need to arrive at 6 am in the morning which I found it to be too tiring. Therefore, after having HDL Steamboat, we immediately made our way to MAH.

The process of admission took about an hour plus as by the time I went up to my ward, it was around 1 am. Sadly my husband wasn’t allowed to stay back as it was a shared room, therefore, he lingered at the lounge area while we waited for morning to arrive.

Many had asked me, was I nervous for the operation. To say the truth, I had no feeling up the point of delivery as I tried to prep my mind for the operation. It wasn’t easy. Having to go through another round of epidural and c-section and there were worries of recovery due to my last dramatic encounter after the birth of Arthur which led to many nights of tears and emotional traumas but nevertheless, I had overcome it and this time, I wanted to be more prepared for Baby Art.

I didn’t really sleep except to chat with my neighbour who is my fellow November mummy group’s friend that chose to deliver the same date as me and we booked the same room in order to keep one another company when our husbands couldn’t stay behind.

Morning came and my friend went for her operation first. Shortly after her, the nurse came and off I went to the operation. Everything was a blur to me, due to having not enough rest, I was feeling very sleepy and slept my way through the waiting period in OT waiting area and even during my epidural injection. Before I knew it, I was in the OT room and my gynae was there asking me whether the man is my husband. The first thought that came to my mind… The man? It took me 30s to recall that my husband supposes to be here. Dressed in OT gown and cheeky smiling at me. I were like… “the time is here!”

Now that was the time to feel nervous. Halfway through the operation, my gynae suddenly told me that my keloid was very bad and if it was so sad on the outside, the scarring inside would be worse. I was like… worse, what it means? As she cut me, she saw my bladder stick to my old wound and as my tummy expanded, the bladder shifted together with it and stuck in front of my baby. As I was starting to feel the effect of the epidural which involved shivering, everything she mentioned to me was a blur. She mentioned about she needed to do a minor procedure to remove the inner scarring, shifted back my bladder before the baby could be removed and the whole procedure would take longer than expected. Even as she said so, the baby was out less than 15 min and just as sudden as I felt, she showed me the baby above me and told me the baby was bigger than expected.

Here are some photos my husband took in the OT while I was having the OP. 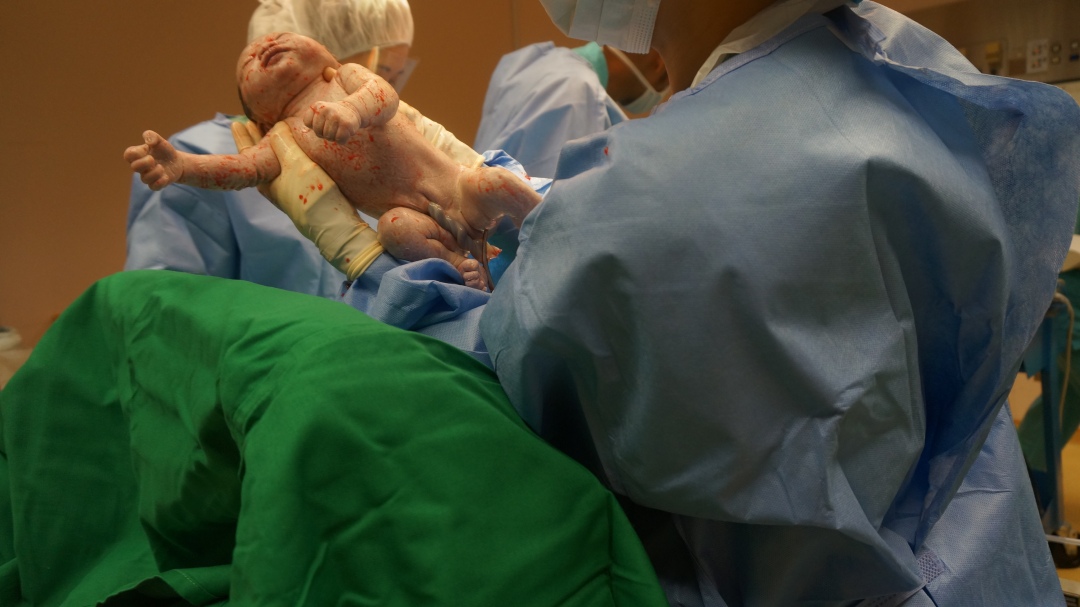 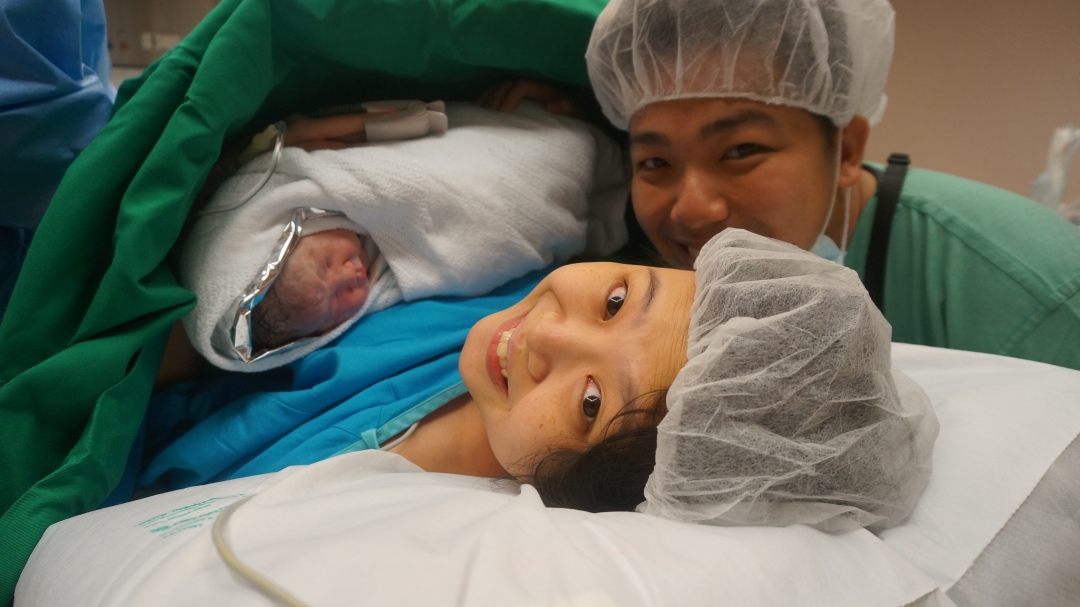 After that, I was sent to the recovery area and followed by ward shortly after. I really could feel a difference between this delivery and previous one. Even the whole process, I felt was much smoother. And looking at Arthena, her smile so sweet. Arthur was knocked out for 3 days while she started to be awake since day 1.

I will share more about my stay at MAH next. =)